Home Europe Guardiola and Mourinho told they’ve got no chance of transfer: ‘From here...
SHARE

Spanish newspaper AS on Tuesday cover the Daily Star’s story linking Manchester United, and specifically Jose Mourinho, with interest in Marco Asensio. They probably could have ignored it, as the claims appeared baseless, but AS have used the opportunity to tell the world Asensio isn’t going anywhere.

It’s not just Manchester United, AS drag Pep Guardiola and Manchester City into it too, just in case they were considering a move for the Real Madrid player.

AS are as gushing as they can be about Asensio, which is understandable, given he looks to have a real and meaningful Real Madrid career ahead of him. The 21 year old has been 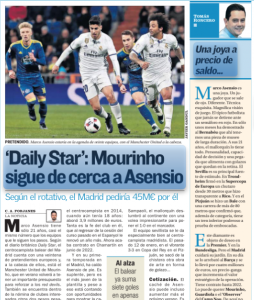 mightily impressive in several performances so far this season, and doesn’t ever seem to disappoint.

In an editorial piece at the side of their coverage of the rumour, AS say: “From here he will not move.”

That’s regardless of whether Manchester United, Manchester City or anyone else come in.

For Asensio, given that he’s getting chances at Madrid and building up games, the Premier League probably isn’t on his agenda for the foreseeable future, perhaps ever.