As many Manchester City supporters will know, the Catalan media have become so tangled in the future of Nelson Semedo that there’s been endless claims around the player’s future, using involving Pep Guardiola’s side.

Monday’s edition of Mundo Deportivo brings a particularly complicated story, and it feels like a strange snipe at City.

The report starts off by saying Guardiola ‘knows’ Timo Werner will sign for either Liverpool or Chelsea this summer, with it then being stated that City had wanted him. Pep had tried to ‘seduce’ the striker, but instead he’s set for a move to Merseyside or London.

Putting aside that Manchester City don’t need Werner, given they have Sergio Aguero and Gabriel Jesus, it’s confusing what on earth any of this has to do with Semedo or Joao Cancelo, with the latter thought to be a possible part of a swap deal.

Mundo try to explain it by saying Werner ‘knows what he wants’, presumably Liverpool or Chelsea, and so does Cancelo. The City fullback doesn’t consider himself a ‘bench man’, and therefore wants out. 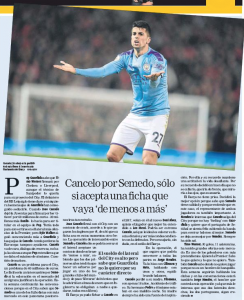 Guardiola’s problem is that City paid €60m for Cancelo and put him on a high salary, so in any Semedo swap, money would have to go to Barca and the player would have to take a pay cut.