Serious Manchester City links with Nelson Semedo are probably overdue. The 23 year old is a right back who can also play as a left back, so he’s pretty much what Pep Guardiola is looking for at the moment.

After a cull of fullbacks, Guardiola will need to add some strength and depth, and that’s why Correio da Manha say he’s keen on the Benfica player. It’s not only Semedo catching Guardiola’s eye at Benfica, Alex Grimaldo is also mentioned.

Manchester City have already sign Ederson from the Portuguese club, and scouting for the goalkeeper may have thrown up further targets. However, Grimaldo has just been ruled out of the U21 Euro Championships with a thigh injury, and with that added to the 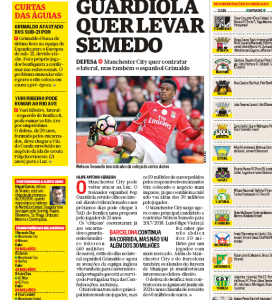 Back to Semedo, and Correio da Manha believe a Manchester City offer will arrive ‘in the coming days’, but they’ll struggle to agree a fee with Benfica.

Barcelona are also interested, but won’t go above €30m, with Benfica wanting €50m.