As far as potential free agents this summer, Paulo Dybala is right at the top of the list, which is why it isn’t surprising to see some of the best teams be interested in the Argentine.

Liverpool have already been mentioned, and now we see Manchester City brought into the mix by Gazzetta dello Sport.

That’s because Pep Guardiola is a known admirer of the player, and ‘he knows that Paulo’s contract is about to expire and that he could break up with Juventus, which is why has asked the club for a madness worth €10m to give himself a 10’.

By that, they mean a contract worth €10m/year, which, as ‘an offer in double figures, would put out not only Juventus but also Inter, another club courting the player’.

Guardiola, it’s said, ‘considers Dybala, who knows how to attack spaces and loves to retreat and wander, a functional player in his football outside the box’.

Bringing in the Argentina ‘at zero cost is an opportunity that a club like City can afford without too many worries’ thanks to their large funds, and ‘therefore the British would have no problem satisfying the economic demands of the Juventus player’. 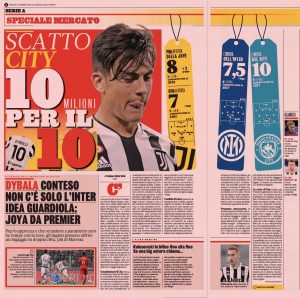 Currently earning €7.3m/year, Dybala was offered a renewal offer in December of €8m + €2m in bonuses by the Serie A side, but things have changed a bit since then, with Juventus going all out for Dusan Vlahovic and ‘have put their number 10 on standby’.

Now, ‘it’s not certain that, when the parties will review the proposal, it will be the same’, and there’s a belief Juventus could try and lower their offer, ‘both for the amount and the duration’.

Dybala has ‘so far not dealt with other clubs because he has always given priority to the Bianconeri, but if the club changes the cards on the table, he could begin to look around’.

While Inter have come forward, they ‘cannot afford double digit wages’ for him, but Manchester City certainly can.

Having already turned down the Premier League once when Manchester United came knocking, Dybala is said to ‘not have a predilection for English football’, but ‘with Guardiola it would be another story’.

As Gazzetta put it, ‘after all, who wouldn’t want to be trained by the best?’

For now, though, ‘there is only Juve’ in the player’s mind, as well as the end of the season, but ‘he has taken into account the possibility that the happy ending will not be reached with Juve’.

His agent will talks with the Serie A side before making any other decision, expected to be in mid-February’, while Manchester City are ‘studying the right move’.

In essence, ‘if Pep shows up with €10m/year and a project up to the 10’s standards, this time it will be more difficult to resist the British temptation’.