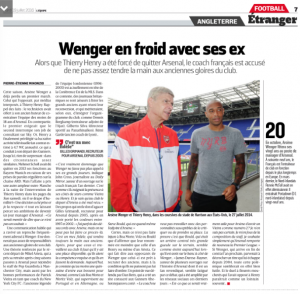 The departure of Thierry Henry from his small role on the Arsenal staff, has led to more debates about Arsene Wenger and how he uses former players.

With Henry’s exit coming not long after Mikel Arteta ended his Arsenal career and took up a role at Pep Guardiola’s Manchester City, the reaction has been concentrated on a wider issue.

Tuesday’s edition of French newspaper L’Equipe quotes journalist John Cross as saying: “It’s a shame that Wenger no longer requires his former great players. It’s as if he feared the presence at his side of stars like Henry or Vieira.”

Cross also added that there was some resentment at Arteta’s exit, but a former Arsenal player disagrees, and L’Equipe say comments like the ones above have only served to annoy Gilles Grimandi.

L’Equipe quote Grimandi, who works for Arsenal as a scout, as saying: “He is a faithful guy who will always reach out to the former players. After that, so they can work at the club there must be a room available, they must have the required competence, and they make a request.

“Today, I see at least fifteen of them work for Arsenal, like Luis Boa Morte and Moritz Volz, who oversee Portugal and Germany, or Steve Bould, who is still deputy for Arsene.”

L’Equipe doubt whether those working for the club are big enough names, Wenger probably feels that doesn’t matter so much.

The newspaper spoke to Dan Betts, who runs an Arsenal website, and he thinks it’s a power issue: “The manager doesn’t want to work with personalities likely to criticise or to take his place.”

James Durose-Rayner, who has written several Arsenal books, is quoted doubting whether it’s such a big issue: “Would it be really useful for Arsene to have Vieira as number 2? I’m not sure. I do not care about the composition of the staff, I just wish that Arsenal win the Premier League again.”

And there in lies the crux, as long as Arsenal are perceived to be underachieving, there will be problems found everywhere.