Now that Manchester United have got their spot in next season’s Champions League, the Antoine Griezmann saga can fully get under way.

Already teasing everyone by claiming there was a 6/10 chance he could join them before the Europa League final, the Atlético Madrid forward then decided to announce it was the right time for him to move on, wanting to win trophies rather than play ‘nice football’.

Clearly hinting he could be looking for an exit this summer, the Manchester United target is yet to be the subject of a bid from anyone, as revealed by his side’s president to RMC Sport in France.

Enrique Cerezo said: “We haven’t had an approach from Manchester United. For now, nothing has come forward and offered to pay his release clause, and I don’t think anyone will.”

Did the Atlético man really believe his words or was he simply goading a certain Ed Woodward into opening his cheque book? We’ll have to wait and see. 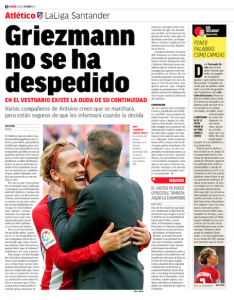 However, the take from Spain, with Marca reporting the feeling from within the Spanish club’s dressing room, is that there is a feeling the France international could leave this summer.

Griezmann is yet to say goodbye to his teammates, but that doesn’t mean he will be staying, with some of them expecting him to have emptied out his locker by the end of the transfer window.

Of course, all these media outings from the former Real Sociedad star could be a ploy to get an improved contract in Spain and push his current team to match his ambitions, but it’s a very strange way to go about it, at least for the second reason, since he risks alienating himself to Atletico’s fanbase.

After all, Manchester United have been used many times by players and agents in the past to get better deals.

The feeling in England is that, with a return to the elite European competition, Griezmann will be at Old Trafford next season, and it appears some members of the Spanish media are slowly, but surely, following suit.

Edit: Griezmann, after being voted Atlético’s best player of April and of the season, took to his club’s website and said: “I want to win trophies with this club, and will do everything possible”.

After all, he would say that to his club’s official channel, wouldn’t he?