For the majority of Olivier Giroud’s time with Chelsea, the Frenchman has been linked with a move away from the club.

The Italian media have been especially keen on the forward’s future, and it’s perhaps no exaggeration to say half of Serie A have been linked with a swoop at some point.

At the end of the season, Chelsea used an option to extend Giroud’s contract for another year, however, it’s thought in Italy that he has a personal assurance he can leave for free, as long as that’s to a club outside the Premier League.

Tuesday’s edition of Corriere dello Sport details interest from AC Milan. They’ve been keen on signing Giroud for a while, and now he may not be the only striker brought in during the current window.

There’s still uncertainty about what will happen with Zlatan Ibrahimovic going forward, as the veteran continues to recover from his knee injury. 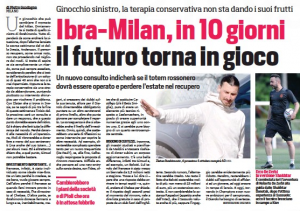 That doesn’t mean Milan would dump Giroud, but they want things sorting out soon.

Corriere state Giroud’s answer ‘must arrive quickly’, and the player then has to go to Chelsea and demand the Blues ‘respect’ the offer to let him leave for free.