In their first transfer window under new owners, Newcastle United managed to sign five players in the winter market. Bruno Guimarães was the big name and he arrived at St James’ Park from Lyon on January 30th.

Today’s edition of L’Equipe gives an insight into when the Magpies first made an offer and why the deal took longer than expected to formalise.

The midfielder was a key figure under Peter Bosz and the French club’s immediate idea was to reject the proposal made by Eddie Howe’s side.

However, the 24-year-old ‘made it clear’ to the Lyon leaders that such an opportunity ‘would not come twice’ and he ‘did not intend to let it pass’. L’Equipe say a move to the Tyneside club has helped the Brazilian quadruple his salary.

Therefore, negotiations opened between the two sides and Lyon were quickly able to obtain what they wanted from Newcastle, which is a deal worth €50m. 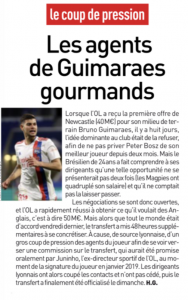 An agreement was reached last Friday, but it took an additional 48 hours to formalise the transfer because of the ‘greedy agents’.

There was ‘major pressure’ from the representatives to be paid a commission, which was verbally promised by Lyon chief Juninho, when they took Guimarães from Athletico Paranaense in 2020.

L’Equipe add ‘the Lyon leaders then cut off contact and did not give in’, which caused issues, until the agents relented.