It was inevitable the Portuguese media would try and get some words from Eric Dier whilst the Tottenham player was away with England for the Nations League.

Dier grew up in Portugal, speaks the language fluently, and came through at Sporting being leaving for Spurs in a cut-price deal… much to the annoyance of Bruno de Carvalho, the Lisbon club’s controversial former president.

As well as it being inevitable the Portuguese media would want a chat, it was also clear they’d ask about Bruno Fernandes.

The Sporting midfielder has been repeatedly linked with Tottenham over the past week or so, with claims of talks and Spurs being prepared to pay a big fee for someone seen as a Christian Eriksen replacement.

O Jogo did the business, and asked Dier about Bruno: “Bruno Fernandes is a player with great quality. I try to follow the Portuguese league, but it’s not always easy. However, I know perfectly well that he is one of the big values of Portuguese football.”

Further quizzed on interest from Mauricio Pochettino’s side, Dier wasn’t ready to help the rumours: “I have read some things, but I won’t comment.” 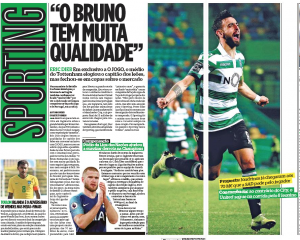 After disappointing O Jogo by refusing transfer comment, the England international then cheered them up by talking about his ‘first love’, the Lisbon club: “I don’t really like talking about a club where I’m not, but I’m making an exception for Sporting. I can say that I was very happy they won two trophies this season. Sporting has been my home for twelve years and will always be in my heart. I’m always happy when Sporting wins trophies.”