There’s no denying that while Alexandre Lacazette hasn’t been the breathtaking signing a few expected when he was signed for £50m, he has still been a good purchase for Arsenal over the past three years.

The Frenchman reminded everyone just how good he can be against Wolverhampton with his quick two touch finish at the weekend, taking his season’s tally to 10 in the process.

However, he also hasn’t played as much as he would have liked over the past few weeks, starting just two out of a possible five games since the restart, and just 17 out of a possible 29 in the Premier League this year.

All this has led to some speculation of an exit from the Emirates, and L’Equipe on Tuesday explain there are a number of clubs very interested in the 29-year-old’s services.

It’s revealed the Arsenal striker has been the subject of ‘very concrete approaches’, and his name has been ticked by ‘various great European clubs’.

One of the reasons for this is his contractual situation, as Lacazette’s deal with the Gunners is just two years from expiring.

L’Equipe state ‘Inter were the first to see an opportunity’, especially if they sold Lautaro Martínez, but they are likely to struggle ‘against the competition from Atlético Madrid and Juventus’, two clubs said to have ‘started discussions’ to get the Frenchman. 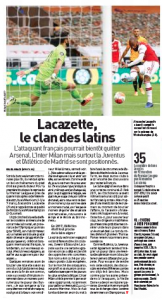 It’s no secret Diego Simeone’s side are big admirers of the player, having tried to sign him the same year as Arsenal, with an agreement reached, only for their transfer ban to scupper the deal.

But his time, in order to ensure they get their man, L’Equipe think they could ‘very probably’ include a player in an eventual deal, with Thomas Partey’s name being mentioned.

As for Juventus, they also ‘could be tempted’ to put a player in a deal, and ‘discussions between different parties have already started’ to see if that can happen.

However, Arsenal, for now, have ‘frozen’ all exchanges as they wait to finish the Premier League season before focusing on any big transfer decision.