Sead Kolasinac protecting himself and those around him from armed robbers is surely one of football’s off-the-pitch stories of the year.

Of course, it would have been better had it never happened, and the problems Kolasinac and Mesut Ozil have since faced aren’t something anyone should have to go through. Yet when he was put in the situation, the defender placed himself in the way of danger and rightly earned much praise for it.

It’s not just fans and the wider public who were impressed by Kolasinac’s actions, his Arsenal teammates were very much of the same opinion.

Bernd Leno has given a lengthy interview to this week’s edition of SportBild, and as well as making it clear he feels Chelsea and Tottenham are in Arsenal’s shadow, he told the German magazine of the dressing room reaction after the Kolasinac incident.

“The spectators call him ‘The Tank’. In the dressing room, he was celebrated after the incident, there was great applause, it’s sensational how he reacted, a dangerous situation in which he has shown much courage.” 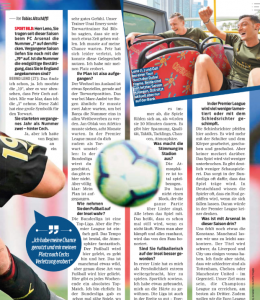 Asked how he finds ‘downtown’ London, Leno responded very positively: “It’s fine. I put on a cap. Some people recognise me, but have great respect. In addition, there are so many tourists who don’t even know who I am. I also often take the subway to the city. From a personal point of view, it’s the jackpot for me here.”

Throughout the interview, the goalkeeper made it very clear how happy he is with life in London and at Arsenal specifically. Leno has big hopes for this season, hoping the Gunners can finish third in the Premier League.