Thibaut Courtois will for a long time have seen David De Gea as his big rival for the Real Madrid spot.

Manchester United have shown no intention to sell their goalkeeper since the fax machine aided his stay, and with Courtois’ Chelsea contract running down, the transfer scenario looked a reasonable one.

Real Madrid would be tempted by getting Courtois cheaper, or even for free next summer, and the Chelsea player could get his return to Madrid and chance to be closer to his children.

Then from nowhere came AS Roma’s Alisson, and he’s now favourite to take the spot. In Spain and Italy there are countless claims of a deal being close, but it appears Roma and Madrid are still some distance apart on price.

Belgium’s HLN reports today that both players would cost the same – €120m. Whilst Alisson comes with a bigger transfer fee he’d cost less in wages than Courtois, and that balances things out on a total package including wages for five years.

HLN report Marina Granovskaia wants to avoid the ‘worst case scenario’ of Chelsea losing their goalkeeper for nothing. Therefore, if he doesn’t sign a renewal this summer, they’ll look to sell: ‘Within the club they secretly hope for more than €50m.’ 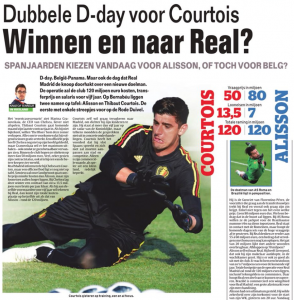 Real Madrid are said to have made approaches to both Courtois and Chelsea, but there’s no official offer. Chelsea have offered around €13.5m per year, and if the goalkeeper wants the same at Madrid it would, along with the transfer fee, make a total cost of around €120m.

It’s suggested that Courtois’ ‘commerical value’ is limited because he’s from a small country in comparison to Alisson and Brazil.

Prolific striker told to pick Arsenal over other clubs by ex-Gunners...