Gonzalo Higuain to Chelsea was pushed by Marca a couple of days ago, with the Spanish newspaper saying a transfer was closing in.

The baton was picked up in Italy and taken a bit further on Thursday, with claims the striker’s brother had travelled to London to try and push things along a little.

Marca now explain how they see the situation and what is holding up a deal from being done.

They disagree that Higuain’s brother Nico travelled to London this week, saying that on Thursday he was still in Buenos Aires, so things aren’t at that stage yet.

Maurizio Sarri wants the player, and it’s thought an agreement can be found with Juventus, who own the player, and AC Milan, where he’s currently on loan with a purchase option. 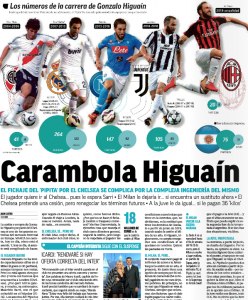 However, it’s then explained Marina Granovskaia ‘does not respect’ the economic conditions Higuain has agreed with Juve, and that Chelsea want to renegotiate them.

The player isn’t keen on this.

Milan would want a replacement in first, so the hurdles which need jumping are in place, and this could drag on a little.