The arrival of Maurizio Sarri at Chelsea has seen Andreas Christensen’s playing time limited this season as he has made five starts in the Europa League and two in the EFL Cup, while he has not played a single minute in the Premier League.

Lack of minutes didn’t stop the centre-back from getting on the front page of Sport as Friday’s edition of the Catalan newspaper claims Barcelona have identified the 22-year-old as an ‘option’, if Samuel Umtiti undergoes surgery.

The La Liga winners are probing the market and the centre-back’s name has been discussed, while their priority is to sign Matthijs de Ligt next summer.

Barca even contacted Chelsea director Marina Granovskaia to find out the possibility of bringing the defender to the Camp Nou, but the response was not positive because they are unwilling to part ways with him midway through the season. 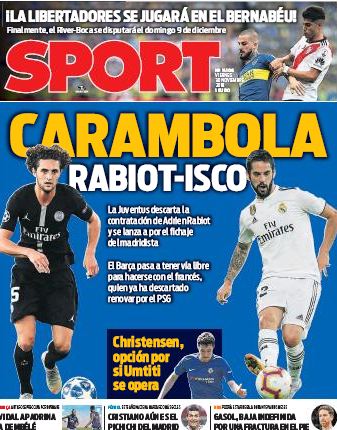 Umtiti is struggling with a knee injury and is now being advised to go under the knife, which will rule him out for the most of the season.

Should he be operated on, then the Blaugrana will continue probing the English club for Christensen and see if they can take him on a short loan spell in January. 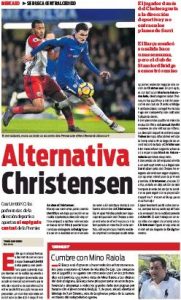 The Dane likes Barcelona’s sporting project and a temporary move away from Stamford Bridge could benefit all parties involved.