Home Premier League Gracia talks about his future at Watford, about particular transfer and wanting...
SHARE

After parting ways with Marco Silva, Watford appointed Javi Gracia in January and handed him an 18 month contract.

Under his guidance, the Hornets have enjoyed a good start to the 2018/19 season.

The former Malaga manager gave an interview to Mundo Deportivo and provided an update on his contract situation, amid reports suggesting that he will sign a three-year deal at the club.

“It is true that we started some conversations with the club, although there is nothing defined. I have a contract until June and I hope to prolong it for more time. I’m happy at Watford and enjoying the Premier League,” he said.

Just days after the 48-year-old arrived at Vicarage Road, he took Gerard Deulofeu on loan from Barcelona and signed him on a permanent deal in the summer.

While discussing the 24-year-old’s qualities, the English club’s manager admitted there was no hesitation before securing his services.

“The interpretation of success or failure is relative. He has always been in great teams and has shown to have a high level. We had no doubt when we could sign him,” Gracia explained.

“He is one of the best footballers of his generation and I trust that he will still improve because he has the quality and the attitude to do it.”

Since being promoted to the Premier League in 2015, Watford’s best finish in the table is 13th and Gracia has stressed the importance of having more stability to take the club forward.

“Watford needs to find stability within the Premier League, something that has not always happened,” the Spaniard stressed. 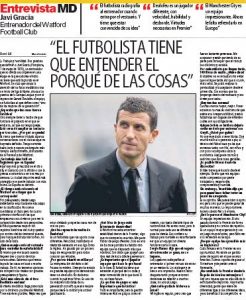 After 12 games, Gracia’s side are seventh in the table with 20 points, seven points behind fourth  placed Tottenham Hotspur.