The front page of Tuesday’s edition of Mundo Deportivo talks about how Lyon’s Ferland Mendy is a ‘favourite’ left-back target for Barcelona.

Ernesto Valverde id expected strengthen the fullback position following the departure of Lucas Digne to Everton, and the Catalan newspaper explains the 23-year-old is not the only target for the Blaugrana.

It’s claimed there are three Spanish players who have also been identified as targets, and these are Liverpool’s Alberto Moreno, José Luis Gayà of Valencia and PSG defender Juan Bernat.

The former Sevilla man’s contract at Anfield runs down at the end of the season and he’s not been included in Jurgen Klopp’s core plans this season because Andrew Robertson is preferred ahead of him.

Moreno has the experience of playing in La Liga and his situation with the Premier League club could ‘facilitate’ his arrival at the Camp Nou in January. In addition to this, the Reds could sanction his sale in the mid-season transfer window, rather than allowing him to leave for nothing next summer. 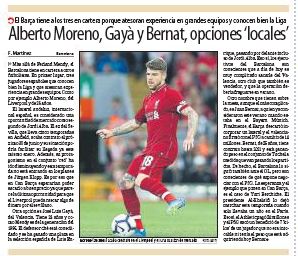 Based on these factors, Barcelona believe they could sign the 26-year-old Liverpool player for a ‘good price’ in January as it’s the only time the English club can earn from their left-back’s sale.

Even if Moreno returns to La Liga, he is likely to be second choice behind Alba.