There’s  good and bad news for Everton, Leicester City, Wolves, or whatever other club who are interested in signing Rafa Silva from Benfica.

The midfielder has been linked to a move out of Lisbon for a few months now, and this weekend, Everton and Leicester were reported as possible destinations for him. Wolves had been linked earlier, and it’s thought any move would be a loan.

Now it turns out the race has become a bit more interesting, because according to O Jogo, the player is blocking a move to Turkey, where he was wanted as well.

The outlet claims that a move to Besiktas was on the table, but Silva ‘closed the door’ as he’s not interested in spending the rest of the season playing in Turkey. The possibility to join another unamed club was turned down too.

The player’s wish to play in England has never been a secret, and was revealed by his own agent when speaking to Sport Witness a while ago.

But despite this pursuit getting quite interesting in the past month, things may be a little bit different in 2018. Because now that he’s playing a little more at Benfica, O Jogo claims that Benfica’s wish to loan him has ‘gone a bit cold’, so maybe the English clubs will have a little more work to convince the Eagles to let him go.

According to the reports from Portugal in the weekend, Benfica’s plan was to loan him out with a buying option of €30m. Everton, Leicester and Wolves would surely want that fee lower, but if it’s not a mandatory option then it doesn’t hold a great deal of weight anyway. 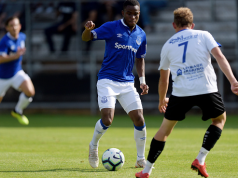 Club now it will be fantasy to recoup €18m paid to Everton, player likelier to see Fulham loan