Home Premier League Aston Villa ‘There is a good chance’ of transfer for Aston Villa man in...
SHARE

Wesley Moraes suffered a serious injury in January 2020 and since regaining full fitness, he has not started for Aston Villa.

The striker was not assured regular playing time at Villa Park this season and, in search of more minutes, he returned to Club Brugge on loan late in the last window.

Back in September, the 25-year-old admitted he was not ready to settle for more time on the bench and Dean Smith [since replaced by Steven Gerrard] understood his decision to leave the English club on a temporary deal.

However, the Brazilian has not seen his situation improve with the Jupiler Pro League side as he has been restricted to just over 100 minutes of action from six matches in all competitions, which includes only one start.

According to Het Nieuwsblad, the Belgian champions will let some of their players leave in the winter market. The Villa owned player is one of candidates.

With Wesley struggling at Club Brugge, the report adds he ‘wants to leave again’ and ‘there is a good chance’ the South American will be sent out on loan again in January. 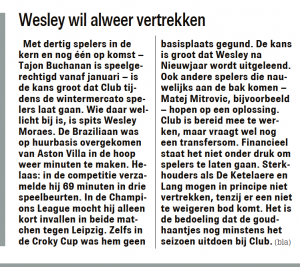 Wesley has already featured once for Villa in August, before joining Club Brugge.

In June 2020, FIFA confirmed that post pandemic, a player can be registered with three clubs, instead of two, during a course of the season.

This was a ‘temporary rule change’ and if it is still in place, then Wesley can play for a new club in the second half of this season.

Else, he will have to either continue at Club Brugge or return to Villa.