Home Europe ‘Good chance’ of manager having ‘Tottenham crest on his chest’ next season...
SHARE

Wednesday saw a flurry of articles claiming that Antonio Conte was in talks with Tottenham over the vacant manager spot.

The former Chelsea man was said to be in ‘advanced negotiations’ with Daniel Levy and co., who are still without the right man for the job all these weeks after the sacking of José Mourinho.

Their favoured targets, which included Julian Nagelsmann, came and went, while other clubs found their man quicker.

Conte remains the last big name out there without a job, and that is surely why Levy has targeted the Italian.

Not only that, he is also intent on bringing Fabio Paratici to help him, as the former Juventus director of football is also without a club after stepping down a few days ago.

Tuttosport explain all this in their article on Thursday, and are very optimistic about it, believing it could be ‘made official within the week’.

As revealed by Sky Italia on Wednesday, they explain the problems are currently on the wages side of things, with Conte’s demands €3m above Tottenham’s offer. 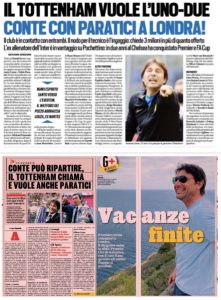 To counter this, it’s believed Spurs are working on bridging the gap with bonuses and a yearly wage rise package.

Gazzetta dello Sport share this optimism, stating ‘there is a good chance of seeing one or both of them with the Tottenham crest on their chest next season or perhaps as early as next week’.

Conte is ‘aware the road to success in the Premier League would be uphill’, but he also ‘knows he would have the time to build a multi year project by Levy.

Paratici, down his end, ‘may not be given full power’ by Tottenham on the transfer market (we all know how the Spurs chairman likes to have his say), but ‘talks about the players have begun’. 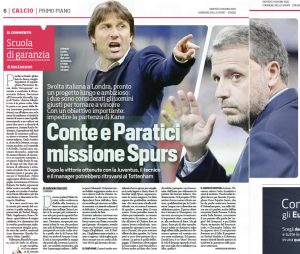 Finally, Corriere dello Sport have their slant, and it’s a bit more pessimistic, as they state ‘there is still a way to go’ to convince Conte, especially with the project currently at hand, as the club finished seventh in the Premier League and have a wantaway Harry Kane.

Nothing that cannot be patched up by the Tottenham board, but it’s fair to say there’s more optimism than negativity in the Italian papers today.