As Wolverhampton Wanderers continue to be named as one of the potential destinations for Sporting midfielder João Palhinha, we today get to see good and bad news in their pursuit for the player.

Portuguese newspaper A Bola features on Monday a story claiming Bayer Leverkusen ‘don’t give up’ on signing the 26-year-old, as they have him as a ‘priority’ for the summer window.

Well, that undoubtedly makes it harder for Wolves to land him, as the competition seems to be growing, with Sevilla getting mentioned as one of the contenders as well.

Now what Bruno Lage’s side should be happy to hear is that Bayer Leverkusen seem unable to pay the price that Sporting are demanding for Palhinha this summer. 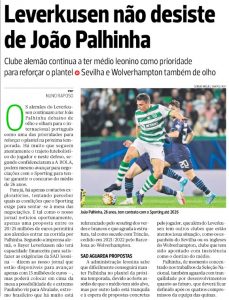 A Bola writes that the Lions will only let the midfielder go for a bid of at least €20m or €25m. Meanwhile, the Bundesliga side won’t have the financial power to pay that much, and are willing to spend only €15m.

This time, Wolves are only referred with A Bola claiming they’ve been linked to Palhinha many times, so there don’t seem to be any updates on their efforts for him.

Last week, many reports from Portugal said Sporting were waiting for the bid from the Molineux.