There’s a growing confidence in Chile that Alexis Sanchez will soon become a Manchester United player.

How do we know this? Well, it’s simple: La Cuarta believe the Arsenal star ‘could start on Saturday’ for the Red Devils against Burnley.

They even start their article with ‘At Manchester United, they’re confident’.

Furthermore, the Chilean newspaper reckon an announcement could be made sometime between today (Wednesday) and tomorrow (Thursday).

According to their information, the deal is ‘practically sealed’ and Manchester United are ‘sure’ the announcement will happen by the end of the week, with a source from the club telling La Cuarta ‘we’re going to sign Alexis Sanchez’.

However, there remains one obstacle in the shape of Henrikh Mkhitaryan, with the whole debacle surrounding the Armenia international explained to Chilean readers, citing multiple British newspapers. 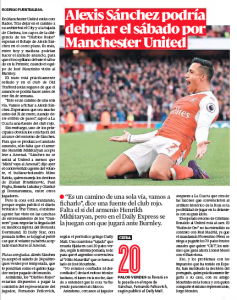 It all sounds really promising, right?

Well, and this is purely the cynics in us talking, the last few paragraph are eyebrow raising to say the least.

According to sources close to Alexis Sanchez speaking to La Cuarta, one of the reasons the Arsenal forward agreed to go to Manchester United is due to the ‘possibility of playing in the same attack as his great idol”.

That man is none other Cristiano Ronaldo, with La Cuarta explaining the Real Madrid superstar’s return to Old Trafford is ‘around the corner’.

Florentino Pérez’s refusal to increase his contract and his tax issues in Spain have ‘shaped the Portuguese’s decision, who is basically on his way home, with his friend Mourinho on the bench, with whom he shares the same agent, Jorge Mendes’.

You nearly had us, La Cuarta.