Christian Eriksen returned to football back in January when Brentford signed him on a free transfer and his performances for the Bees has seen him get linked to Tottenham Hotspur and a few other clubs.

The Denmark international has managed a goal and two assists in six league games for Thomas Frank’s side, and both his performances coupled with the time left on his contract has helped him draw attention from elsewhere.

Eriksen’s deal with Brentford runs down on June 30th and Frank has admitted he wants to retain his compatriot, even though the 30-year-old continues to be named as a target for Tottenham Hotspur and other clubs.

“The opportunity speaks for itself in relation to the history that Christian has with Tottenham. He will always be a hot topic and at the heart of Tottenham,” Højbjerg told Tipsbladet.

“He has the qualities, and he has the personality. And then he’s still at a good age. He has had many good years at Tottenham and that is why I always think his name will be hot in the club. It goes without saying, I think.”

“I did not see Christian in person before the transfer [to Brentford], but we talked on the phone in January. I was a little curious and asked how he was doing. Nothing dramatic there.”

“I am very happy on his behalf that he has come to the Premier League. I think it’s a league that suits him well. And then I hope he is not too good when we have to meet them. I think it seems to be a really good choice for him.”

Tottenham had a difficult start to the season when they were constant speculation around Harry Kane’s future in the summer of 2021.

Spurs sacked Nuno Espírito Santo and replaced him with Antonio Conte last November. Under the Italian’s orders, they now sit in the fourth spot. 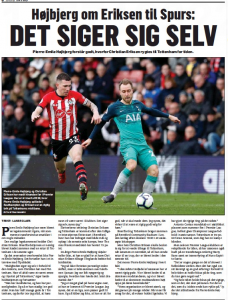 “Our organisation has become strong, and it benefits in many ways. When you get a taste for it, the team grows as well. We’ve been doing the right thing lately.”

“It’s sometimes part of the show in the world of football. But it has also been instructive and a good experience in terms of constantly focusing on the things that you can do something about. And constantly focus on the important thing, which is what happens on the pitch, because that is what you can ultimately move on.”

Eriksen and Højbjerg will be facing each other when Brentford host Tottenham Hotspur in the league tie on Saturday.