It’s been a while since we covered a rumour about Thomas Strakosha, but it appears the goalkeeper’s good season is catching the eye of a number of clubs in England.

The 24-year-old has only conceded 23 goals in 26 Serie A appearances this season, which is a stark contrast to Everton’s Jordan Pickford, who has let in 46 in 29 Premier League games.

Why do we bring up the Goodison Park goalkeeper? Because Everton are allegedly one of the clubs looking at the Albania international.

Il Tempo are the ones reporting it, explaining the shot stopper has ‘attracted the attention’ of the Toffees, Leicester and Tottenham. 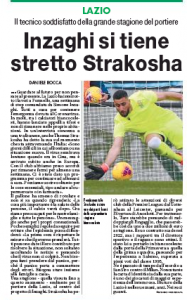 Lazio, down their end, have no intention of letting their star man go, and their move will be to try and get him to sign a new contract, doubling his salary from €1m a year to €2m along the way.

Furthermore, with Serie A suspended and Lazio in a Champions League spot, it would make little sense for the Albanian to leave Rome at the end of the season, especially with Everton currently in 12th in the league.

One to keep an eye on, certainly, as Pickford continues to fail to impress this season.