Chelsea have emerged as a main contender to sign Sevilla star Jules Koundé in the past few days.

On July 29th, Mundo Deportivo explained the defender has an agreement in principle with the Blues, while the La Liga side are waiting for the English club to make a move.

Marca on Friday explain the La Liga side haven’t received an offer from the Champions League winners so far.

Julen Lopetegui’s men are currently in Portugal for pre-season and the 22-year-old is still not clear whether he will continue with the club or start a new adventure in England.

There’s been talk of the west London club planning to include some of their own players to acquire the France international’s services, but Sevilla prefer ‘only’ money.

Claims made by Marca are also echoed by today’s edition of Sport. It’s said the 22-year-old’s future is ‘not resolved’ as he continues to be linked with a move to Stamford Bridge.

Sport state Koundé’s ‘intention seems clear’ and that’s ‘to go to Chelsea’, but the ‘question is how’.

The former Bordeaux man has an €80m release clause, which the Champions League winners aren’t willing to pay.

Chelsea are planning to include Kurt Zouma or Emerson Palmieri, but the Spanish club 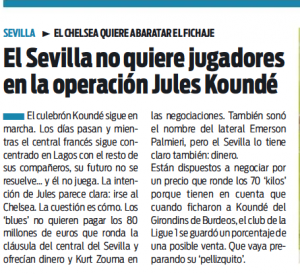 don’t want to take any players as part of the deal.

Sevilla, however, are ‘willing to negotiate’ Koundé’s sale this summer for a price of around €70m as they will have to pay part of the transfer fee to his old club, Bordeaux.

Koundé ‘seems clear’ he wants to join Chelsea and if they can find an agreement with Sevilla, a deal can be concluded.