At this rate, even Rangers fans can agree that Alfredo Morelos might have outgrown the club a bit.

It’s no slight on the Ibrox side from our part, but the Colombian has been leading the scoring charts for the past couple of years, and it might be time for all parties to part ways in order to allow him to further his career, which would then allow the Glasgow club to make a profit.

Brought from HJK Helsinki in 2017 for just £1m, the 24-year-old is worth at least 10 times that now, once again showcasing his ability in front of goal this season with 29 strikes in 46 games, as well as assisting another 10.

The player feels like it might be time to move on, saying as much himself late last year, and his agent has already started talking to other clubs, which he admitted to not too long ago.

Napoli were one of the clubs targeted, and Corriere dello Sport mention that on Tuesday, explaining the Rangers star could be a back up option for the Serie A club should their deal for Victor Osimhen fall through. 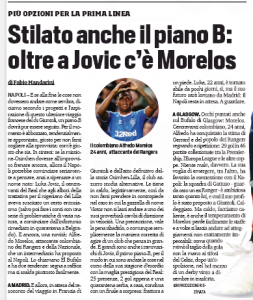 They say Morelos’ ‘desire to emerge’ is what ‘favoured the connection with Napoli’, as Gennaro Gattuso’s side are ‘as ambitious as he is’.

However, they do warn about his ‘hot’ temper, recalling his ability to pick up frustrating and unnecessary red cards.

He’s on Napoli’s list, but the number one target remains the aforementioned Nigerian, perhaps much to the relief of Steven Gerrard.