When it comes to wasted years, Kemar Roofe’s time at Anderlecht will undoubtedly go down as that.

The striker joined the Belgian club from Leeds last summer but, a year later has returned to the United Kingdom in a move to Rangers.

The deal has been welcomed at Ibrox, with many believing that Steven Gerrard’s side have secured a bargain and the kind of striker that Rangers desperately need to help them compete with Celtic next season.

Anderlecht too, are seemingly happy with the deal, and that’s a sentiment made clear in the press today with Het Laatste Nieuws journalist Pieter-Jan Calcoen going out of his way to take a swipe at Rangers latest signing.

He starts his opinion piece on Roofe by stating the player is ‘not as good as the Englishman himself claims’ before diving into the deal.

He explains that Anderlecht will lose money on the striker if he has left for €5m, having spent €6m to sign him from Leeds last year.

On the face of it that represents a ‘strange deal’ but in reality, the Belgian club will be ‘satisfied’ they’ve managed to ‘pawn off’ Roofe this summer in a deal he thinks is the best transfer that’ll happen this summer.

First of all because he ‘weighed too heavily’ on their wage budget as their top earner, a wage he wasn’t justifying given he managed just seven goals last season.

That number was ‘disappointing’ given the money they paid out. Similarly, he argues that ‘there is no place for guys like Roofe’ at Anderlecht, who are trying to run themselves as a profitable club. 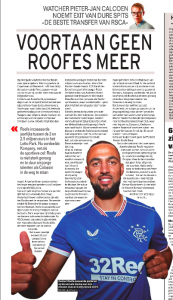 Indeed, the entire transfer was a ‘miscast’ with Vincent Kompany even admitting that Roofe was ‘not strong enough and too expensive’.

That was why they were happy to enter negotiations with Rangers and sell quickly, despite the league being about to start and the fact they were making a loss.

Roofe, Calcoen argues, has shown Kompany and co. ‘how not to do it’.

Whether Rangers will care remains to be see, but the likelihood is that they won’t.

They’ll instead take these kind of reports for what they are, a needless and shameless dig at a player who arrived injured and never managed to recover from it.