With Fabio Paratici’s arrival at Tottenham Hotspur this summer, it was quite obvious that we’d soon see Spurs being linked to several players from Serie A.

Now with the club’s new football director looking for targets, newspaper Tuttosport brings a more interesting angle of it, which is about his personal competition with Juventus for some of those players.

The newspaper explains that when changing clubs, officials end up keeping the same targets they used to have. That’s why we could see some battles between Spurs and the Old Lady in the next transfer windows.

The peculiar situation now is that both sides could lose their centre-forwards this summer. Just like Harry Kane doesn’t want to stay at Tottenham, the Old Lady don’t know what Cristiano Ronaldo will decide for his future either. So the two clubs could go for players of the same position. 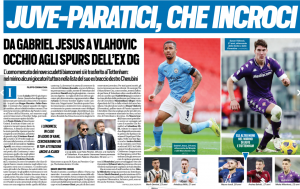 The main target for the Premier League side is presented as Gabriel Jesus, who’s also been linked to Juventus for a while.

Tuttosport claims that Manchester City could try to land Kane this summer, and if that happens, then Tottenham will ask for the 24-year-old to be included in a deal. It’s said that would depend a lot on Pep Guardiola’s side and the Brazilian’s wish.

Other options are Dusan Vlahovic, Mauro Icardi, Arkadiusz Milik, Andrea Belotti, Nicola Mikenlovic. They’ve all been targeted by Paratici and could now be chased by Spurs as well.

The London side already chased after Belotti in the past, and with Torino president Urbano Cairo claiming he wouldn’t sell the player to another Italian club, that’s a target for who Tottenham would have an advantage over Juve.