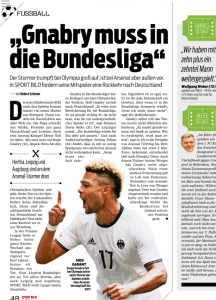 Serge Gnabry has had the Olympics his career needed, and it’s not over yet, although it may well be by the time you read this. Gnabry’s performances have been catching the attention of the German public and media and so a big question has been presented.

Why isn’t Gnabry getting game time at Arsenal?

There’s not much patience to wait from the German media and Gnabry has been linked with several moves, either loan or permanent, to the Bundesliga.

In their magazine this week, SportBild go over interest from Hertha Berlin, which has been reported before, and say RB Leipzig and Augsburg are also interested.

SportBild have spoken to Gnabry’s teammates from the German Olympic squad, and got positive responses about a return to Germany.

Leipzig striker Davie Selke is quoted as saying: “He would be an asset to the Bundesliga. He is just the right fit, because you can see what an exceptional player he is.”

Hoffenheim’s Jeremy Toljan added: “Serge has to play, simple. Actually, it does not matter where. He is an asset to any team. But if he would come to the Bundesliga, even better.”