In case you weren’t aware, somehow, Ianis Hagi is the son of Gheorghe Hagi.

It’s not exactly a well kept secret, since they have the same last name and all, but the Romania international, currently on loan at Rangers, appears to have a bright future ahead of him.

Starting his career in Romania at the Hagi Academy (yes, we know), the playmaker then got his first taste of professional football at FC Viitorul before moving to Italy with Fiorentina.

The 21-year-old has already travelled around most of Europe, also playing in Belgium with KRC Genk, who technically own him, and now Scotland at Ibrox under Steven Gerrard.

His career hasn’t been quite as straightforward as his father’s, who only played for six clubs in his 19-year spell as a professional footballer, but that isn’t a worry for Gheorghe, who believes entirely in his son.

Speaking to Corriere dello Sport, he said: “If you’ve sene him play, you’ll have noticed he has a great talent, he’s a number ten that can do everything. At Fiorentina, he was young and you know how Italy are, they have little patience with young people, they want everything immediately. 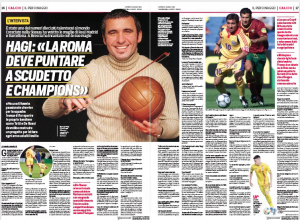 “Fiorentina has remained in his heart and this experience taken him to Genk. Now Steven Gerrard wanted him at Rangers, and Gerrard told me he is doing exceptional things. There’s nothing to do. Even the most ‘talented’ young man be given an opportunity to make mistakes”.

Explaining he has ‘passed on his philosophy’ to the Rangers starlet, Gheorghe Hagi simply asks his son to ‘listen’ to him, but the final decision will always be the youngster’s.

As for whether he sees Ianis as having the potential to make it in a top 10 club, he said: “100%, and do you know why I tell you that with certainty? Because he likes big challenges and the more important the game, the more Ianis can be decisive”.

Rangers fans are already all too aware of that following his brace against Braga in the Europa League and his 84th minute winner against Hibernian back on February 5th.