Home Europe Germany’s SportBild mocks player up in Leicester kit and asks him about...
SHARE

Alfred Finnbogason has had a reasonable season in the Bundesliga. With 12 goals and three assists in 23 matches, his ratios are pretty good.

Several injury layoffs, for various ailments, is the reason behind a relatively small number of appearances for the 29 year old, but he’s managed to impress when on the pitch.

That’s led SportBild to look at various transfer opportunities for the striker.

The German magazine have pictured him in the shirts of his current club, Leicester City, Wolfsburg and Hoffenheim. Whilst it’s stated the two German clubs have been interested in the past, there’s absolutely no reason given for picking the Foxes.

It’s quite curious, and SportBild asked Finnbogason what he thinks of the Leicester Photoshop, to which he replied: “The blue of the jersey is similar to Iceland’s national team, I like that. But I feel very good in the Bundesliga, here I found my place. I see myself in the Bundesliga in the next few years.” 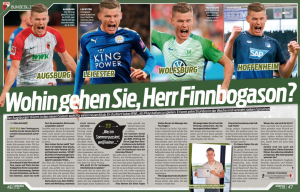 So to dismiss Leicester’s chances, it’s stated: ‘In England, he is very popular. But the striker wants to stay in Germany’