The Ralph Hasenhüttl train continues to hurtle towards its destination, as reports from Germany and Austria have the deal ever more done.

On Tuesday we first covered claims from German newspaper Bild that Southampton had agreed a contract with the former RB Leipzig manager, and that the contract would last until 2021 and be signed in the coming days.

Then, we found claims in Austria that the contract had actually already been signed, and it was just a matter of getting him in place.

Today’s edition of Bild again goes over the 2021 deal, and says Hasenhüttl will be in the stands to watch Southampton against Tottenham on Wednesday night at Wembley.

This will be his first chance to take a look at his new team. 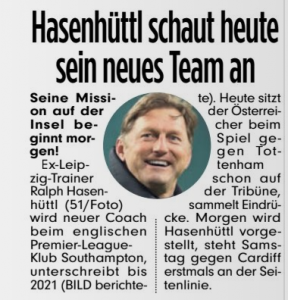 It’s explained the presentation will then be tomorrow and Hasenhüttl will subsequently be on the sidelines for the Saints’ match against Cardiff City at the weekend.