Home Premier League Arsenal From Germany: Mesut Ozil is renewing with Arsenal, and these are the...
SHARE

It may be Pierre-Emerick Aubameyang Day, but Mesut Ozil is also helping to cheer Arsenal fans up after a miserable loss to Swansea City.

German newspaper Bild report, according to their own information, that Ozil will renew his contract with Arsenal.

After the World Cup in Russia, Ozil will marry his girlfriend Amine Gülse, and then they’ll continue their life in London, as the German international continues to play for the Gunners.

Aubameyang is said to be staying because of Arsenal’s recruitment, with Aubameyang and Henrikh Mkhitaryan the sort of January recruit he was looking for the club to get. 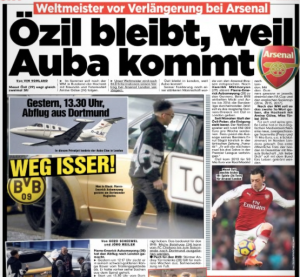 Ozil will be earning €350,000 per week at Arsenal under his new terms, gaining back his status as the highest paid footballer at the club.

Now Arsenal just need to get the Auba deal over the line, because if they manage to mess that up, Ozil could be in danger too.

“They just wanted to have the player” – Midfielder reveals why...