Home Europe From Germany: BVB players ‘should be ashamed’, line up to face Tottenham...
SHARE

Borussia Dortmund’s Tuesday morning was a little chaotic to say the least.

First they had to announce that none of Reus, Alcacer, Weigl and Piszczek would be travelling to London to face Tottenham.

Weigl is suffering from a flu-like infection, which is an added worry given Lucien Favre had the same thing at the weekend. There’s always the danger it has spread further.

Then, once the fit players got to the airport, it transpired that Jadon Sancho and Abdou Diallo had forgotten their passports. They had to return home, and the flight was delayed.

Whilst Sancho and Diallo were making their quick dashes, Ömer Toprak lost his boarding pass at the airport.

It’s funny. The whole thing is comical. But for some in Germany it’s also pretty serious.

The Tottenham game is huge for Borussia Dortmund, so the lax attitude has brought some criticism. Bild say the players involved ‘should be ashamed’.

Sancho and co are ‘responsible’ for the chaos ahead of BVB’s ‘most important match of the season’.

They continue: ‘Football millionaires give up responsibility for almost everything except 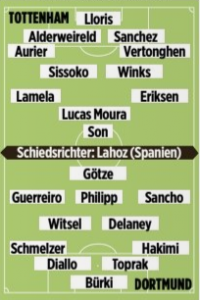 for goalscoring these days. Frightening, that they seem overwhelmed with everyday matters.

If the gentlemen with this attitude, with this concentration, go to the pitch today, then good night Borussia.’