Portuguese newspaper Record today features a piece on Pedro Neto and the great potential shown by him at Wolverhampton Wanderers.

In a column written by journalist Rui Dias, the 20-year-old gets big compliments for his style of play, with the story saying the country hasn’t had an attacker like him since Paulo Futre, who retired in 1999.

“The left-footer of Wolves has personalised solutions of immense wealth. All of it is intuition and movement, linked to explosive sensations, as soon as he comes in contact with the ball. Even when he does it in neutral parts of the pitch, his mind is buzzing just thinking about what he’s going to do next,” the story says.

Now even though we’re sure Wolves fans are proud to see their young player getting such recognition in his home country, here comes the usual unpleasant part, which is when he’s urged to change clubs. 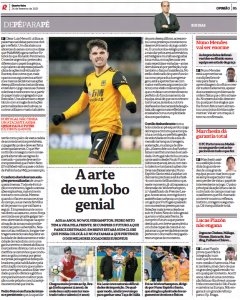 Rui Dias has no problem claiming that in case Pedro Neto continues showing all this potential, he’ll soon have the chance to prove himself for a bigger side.

“Pedro Neto is the genius wolf who has his life ahead of him. If he fulfils the future to which he seems destined, he will soon ascend to a club capable of putting him on the level to which he truly belongs: that of the best European players of the moment.”

That’s something we got used to seeing when reading the Mexican media, as Raúl Jiménez is often said to be deserving of a bigger club to play for. However, if Wolves have so many players who are ready to win things somewhere else, perhaps it’s the Molineux side who should be close to taking the next step to greatness.