Manchester United’s search for a centre-back was well documented towards the end of the Premier League’s transfer window, with the club eventually spending over £80m on Harry Maguire.

The England international was apparently the main target for the Old Trafford club, with Ole Gunnar Solskjaer highlighting him for his many qualities, feeling he was exactly what he needed to shore up his backline.

However, early attempts to acquire their number one on the list didn’t go to plan, meaning other options were looked at, including Kalidou Koulibaly.

At least, that’s what Gazzetta dello Sport claim on Friday, as Aurelio de Laurentiis revealed on Thursday he, as Napoli owner, rejected a £105m offer in August for the Senegalese star.

He never mentioned a club, but when the Italian newspaper transcribed the interview in their Friday edition, they added an editor’s note, claiming the club with the offer was Manchester United. 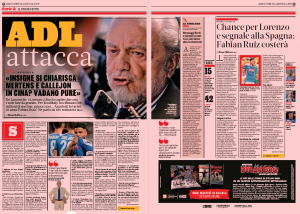 It would make sense, since they are one of the few sides capable of offering such money and were one desperate for a centre-back.

On top of that, De Laurentiis also admitted he knew he couldn’t hold onto Koulibaly forever, and would have to sell him ‘sooner or later’.

Good news for Manchester United in the grand scheme of things, but before they can convince him, they might to improve their showings on the actual football pitch.