Catalan newspaper Sport have decided to stir the pot up at West Ham United, with an article claiming Quique Sánchez Flores is actually the man the club’s owners wanted in charge.

Taking an age to finally sack Slaven Bilic, that David Moyes would get the job was no secret, with the manager and club both seeming to send their own leaks out.

Now Sport report the former Watford manager could leave Espanyol at the end of the current season, and take up a job at West Ham. 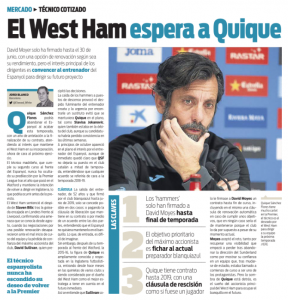 With a contract until 2019, there’s every chance Espanyol are being pushed to offer their manager an extension and a pay rise.

West Ham could be used as a threat on the horizon, and Espanyol nudged into offering a new deal with more money, and a higher clause.