Stefan Kutschke would have signed for Fulham in 2014 had the club not taken the decision out of Felix Magath’s hands, according to the player himself. The 28 year old striker was strongly linked with Fulham at the time, and a transfer nearly went through, but signing players wasn’t down to Magath alone.

Speaking to German magazine SportBild, Kutschke was asked about the situation: “We had met in Berlin. Mr Magath was a coach at Fulham and wanted to have me. I was in London and looked at everything. That would have been a dream. But he could not decide on transfers alone. Instead of me they brought in a Scottish player from the second division. Too bad.” 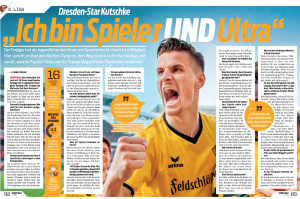 overall. Over in Germany, Stefan Kutschke is now playing for Dynamo Dresden, a club he supports, so missing out on his Fulham dream had some benefit in the end.

This is Dynamo Dresden’s first season back in Bundesliga 2. They’re not doing badly at all, helped by 18 Kutschke goals. Currently in fifth place, Dynamo will look to kick on and aim for a return to the big time as soon as possible.