Turkish newspaper Aksam report Fulham goalkeeper Fabri has sent a message to Besiktas as he wants to return to his former club next summer.

Loaned to La Liga side Mallorca during the final stages of the last transfer window, the Spanish goalkeeper made his first start for the club last weekend in their loss to Valladolid but Aksam report he’s keen to re-join Besiktas at the end of the season.

Besiktas sold Fabri to Fulham for €6m in 2018 but the player only made two appearances for the London club.

His debut season with Fulham was a total disappointment and Aksam claim the 31 year old believes returning to the Super Lig could help him make a fresh start in his career. 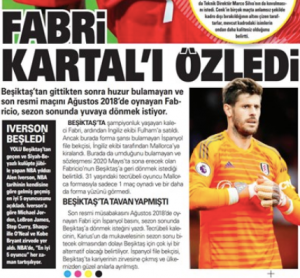 The Turkish newspaper also adds Fabri could be a reliable option for Besiktas as Liverpool loanee Loris Karius is expected to leave the Turkish club at the end of the season.