It appears Fulham have overtaken West Ham in the race to sign Luca Pellegrini from Juventus this summer.

The Hammers were reportedly top of the pile a mere 24 hours ago, according to Corriere dello Sport, but the same newspaper on Tuesday have now changed their tune.

Looking at the Italian defender’s future, they explain he ‘will no longer alternate’ with Alex Sandro at left-back in Turin, as he has ‘asked for a sale because he is eager to play more consistently’.

While the newly promoted Monza have come forward, the €12m request from Turin made them turn around fairly sharply.

Matters are different in England, however, where West Ham and Fulham are reportedly ‘pressing’ to sign the player.

Not only that, but ‘the Craven Cottage club are in pole position and appear ready to invest €12m’ in the 23-year-old. 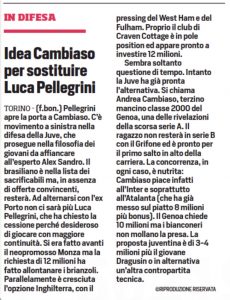 When that will happen isn’t said, but it seems Marco Silva is keen to work with the one time capped Italy international.

Not only that, but €12m is a fairly affordable price, especially for a newly promoted side like Fulham, who will be keen to avoid dropping back down to the Championship a year after coming up.