Loaned for the season from Paris Saint-Germain, Alphonse Aréola has impressed for Fulham this season.

There’s no two ways about it, and the Cottagers would likely be far worse off than they are without the France international between their sticks, which is a good thing for all involved.

After all, Fulham have an option to buy, most likely tied to whether or not the club stay up in the Premier League, meaning they could make the move permanent if they so wish.

However, with Scott Parker’s men currently playing with fire in and around the relegation zone, Mino Raiola cannot be blamed for looking at other avenues for his client.

Managing both Gianluigi Donnarumma and Aréola, the super agent has his fingers in plenty of pies right now and is likely to have a busy summer, since the Milan star has yet to renew his deal, and Paris Saint-Germain are interested in having him replace Keylor Navas for when the Costa Rican calls it a day.

The Ligue 1 champions also happen to own the Fulham loanee, which is why Tuttosport, perhaps unsurprisingly, are reporting that Leonardo has been trying to nudge the Frenchman towards the Serie A side in hope it helps them acquire his Italian counterpart. 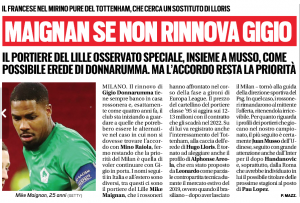 It’s said his name is ‘hovering’ around Milan, but should Donnarumma move elsewhere, the Italian newspaper reckon the Rossoneri will look at goalkeepers within their league, with Juan Musso ‘the most followed’.

The priority remains extending the Italy international’s contract, and with Fulham only two points behind Newcastle, albeit having played an extra game, there’s still hope for them to stay up and potentially make Aréola’s loan a permanent deal.