According to Sabah, Fulham’s Jean Michael Seri currently ‘tops’ Galatasaray’s shortlist as they look to bring in a central midfielder for next season.

The Turkish champions are in the market for a midfielder after Stoke City’s Badou Ndiaye returned to his parent club and, their other first-choice midfielder Fernando is said to be on the verge of agreeing a move to Sevilla.

Sabah claims Galatasaray manager Fatih Terim is a big fan of the 27 year old and he’s told the Turkish club’s board signing the Fulham player could be a great addition to the squad.

It’s claimed Gala will make a loan offer for Seri and Sabah say they also have other targets in mind, including former Swansea City midfielder Roque Mesa.

Cim Bom will be competing in the Champions League next season and they want to strengthen their squad after missing out on the knockout stages during the last campaign. They will also be looking to defend their Super Lig title. 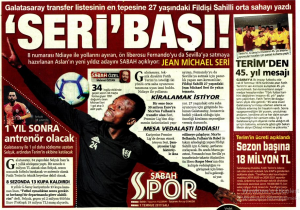 Seri is expected to leave Fulham after the London club’s relegation from the Premier League as he is under contract at Craven Cottage until June 2022.