After reading the Portuguese media today, any person would be pretty convinced that Rui Fonte’s return to Braga is a done deal.

Most of the local newspapers have stories about the 29-year-old, who should soon have his departure from Fulham made official.

According to A Bola and many others, Braga are getting the striker on a free transfer, with the Cottagers keeping 30% of a future sale.

Fonte is expected to sign a three-year contract with the Portuguese side, although there are no details of when he will land in Portugal to do so. 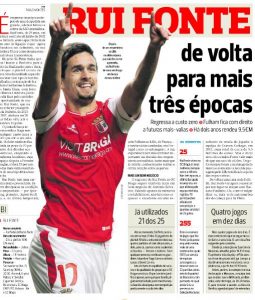 Fulham paid €7m to sign Rui Fonte from Braga two years ago and finished his first season for the club with three goals and five assists in 29 appearances.

That was not enough to keep him at Craven Cottage for longer, as he was loaned to Lille last season where his campaign in France wasn’t any better, as he scored only one goal in 20 games.

Arsenal ‘do not lose sight’ of signing – Attractive loan deal...