Fulham winger Ivan Cavaleiro is featured in an interview with Portuguese newspaper Record on Monday.

Cavaleiro signed for the Whites on a loan deal from Wolverhampton Wanderers last summer, with the move being made permanent in January this year.

Asked about his first season at Craven Cottage, the winger says it’s been a little hard for him to leave a club which was full of Portuguese players.

“It wasn’t easy. I really liked being there, but I preferred to leave because I didn’t have many chances to play in Premier League,” Ivan Cavaleiro told Record. “I found it strange, but I quickly got used to it. I integrated easily because the dressing room is good.”

Still, about his preference for London or Wolverhampton, he says he’d rather live in the capital: “I prefer to be in London, because here I have more Portuguese childhood friends. I think I have more family here than in Portugal [laughs].”

Cavaleiro has also praised Fulham fans, saying they already have a chant for him: “The relationship is good, they push me during the games. Yes, there is a song, I’ve heard it a few times.” 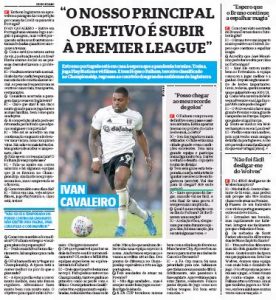 Just like in every conversation these days, the story had a part about the Coronavirus crisis, and the impact it’s had on the Championship season.

Cavaleiro was first quizzed if he agrees that the season should be paused for a while, and sounded pretty convinced about it.

“Of course yes! It is a very big risk for players and their families, as well as for fans.

“I don’t know if I believe in its continuation until there’s a vaccine, a cure for the virus. There are more and more infected. But I would like to finish the championship, of course.”

Regarding the pay cuts which players have been taking, he said: “There is a lot of talk about salary cuts and there are some teams that have already made them in the Championship. They haven’t proposed it to us yet, but I understand if they do.”