Home Championship Fulham ‘not in the race’ for fullback – Cottagers interest in player...
SHARE

At the weekend, we covered Fulham being pointed out as a potential destination for FC Porto left-back Zaidu Zanusi.

It was claimed by Jornal de Notícias that the Cottagers ‘intend to offer’ €12m for the player, even though the Dragons are looking for a bigger fee this summer, willing to sell him if they get at least €20m.

Today, it’s newspaper A Bola who writes about Zaidu, claiming that following the investment of €4m Porto made in 2020 to sign him from Santa Clara, the Dragons could now make five times that with his sale.

The outlet confirms that the 25-year-old could indeed be on his way to the Premier League, where there are two clubs of ‘medium dimension’ who’d like to bring him to England. 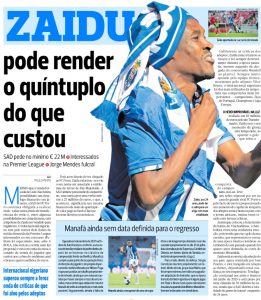 A Bola, however, claims Fulham are not one of the pair.

They point out there have been rumours saying Marco Silva’s side have been chasing Zaidu, but according to their information, they’re not in the race and have not made an offer.

So if the newspaper is to be believed, the admirers the fullback has in the Premier League are still to have their names revealed.