At the start of the week, it was claimed by the English press that Fulham, Newcastle United and Southampton are all interested in Vitória Guimarães defender Jorge Fernandes.

It was said that the Whites, the Magpies and the Saints had the chance to sign the 23-year-old in a £16m move in January, since Portuguese sides have been struggling financially.

The Portuguese media is covering the news today, and instead of encouraging the rumour, they actually play it down a little.

Newspaper O Jogo features a piece saying Vitória Guimarães will work to keep the player, and are focused on resisting any offers that show up in the January transfer window. 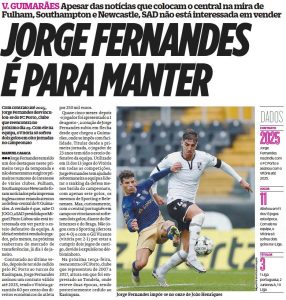 Fernandes had a quick adaptation to the team following his €250k move from Porto in the summer, and Vitória Guimrães want to have him for at least a little longer.

Of course we wouldn’t doubt that Fulham, Newcastle or Southampton could end up convincing the Portuguese side over a sale, but it looks like it will take some big work for that to happen.