Last week, reports coming out of England explained Norwich City are interested in Real Betis’ William Carvalho and the Spanish press then suggested a loan deal is ‘increasingly likely’.

Daniel Farke’s side are not the only English club looking at the midfielder as Fulham have joined the chase.

That’s according to Mundo Deportivo, who say the Cottagers are showing interest in the 29-year-old in the last few hours.

It’s said the Championship club have contacted Manuel Pellegrini’s side to request the Portugal international on a loan deal with a mandatory purchase option, if they get promoted to the Premier League. 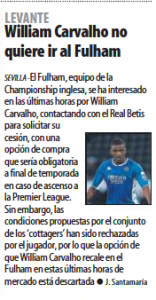 There’s no mention of the Spanish club’s response, but the newspaper do provide an update on the player’s stance.

It’s claimed the ‘conditions proposed’ by Marco Silva’s side have been ‘rejected’ by the ex-Sporting man, and therefore, a move to Craven Cottage for Carvalho has been ‘ruled out’.

The English club’s latest approach has come to an end after Carvalho made it clear he ‘does not want to go to Fulham’.