As you might have seen from the number of articles we’ve done on all the praise André-Frank Zambo Anguissa is getting in Italy, they are thrilled about his loan to Napoli.

The Fulham midfielder, much like he did at Villarreal, has managed to quickly integrate his new team, to the point where it’s believed the Serie A side will trigger the €15m purchase clause sooner rather than later.

For them, it’s a win-win situation, since they are already convinced that paying the fee to the Cottagers is the right move, knowing full well they would find themselves with a player capable of bringing them an immediate profit.

That’s because, according to Gazzetta dello Sport, the Fulham player is already worth more than €25m, as they explain that when ‘comparing the midfielder’s current value with the valuation agreed at the end of August, there is already a difference in surplus of €10m’. 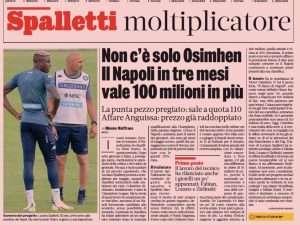 This is due to the fact that he is ‘considered one of the surprise of this first part of the league’ with his performances, slowly but surely giving the Championship side food for thought when it comes to the amount they agreed to for the purchase clause.

Then again, he wanted to leave, and €15m is better than an unhappy player on the bench or in the stands at Craven Cottage.