Turkish newspaper Takvim report Fulham remain keen on signing their former player Ryan Babel, and that they could make an official offer to Galatasaray in the coming days.

The Dutch winger was loaned out to Ajax for the second half of the season after joining Gala on a free transfer last summer.

Despite Fulham’s relegation in the 2018/19 season, Babel managed to score five Premier League goals before heading back to Turkey.

Takvim report the west London club will look to strengthen their squad following their return to the Premier League, and are targeting the attacker.

It’s reported the 33 year old is again interested in playing in the English top flight, and Fulham will hold talks with his club in the coming days. 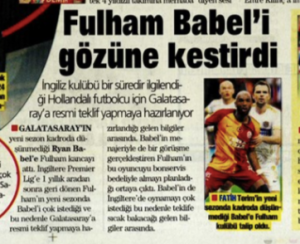 The Istanbul side are likely to demand a small transfer fee for the Dutchman, but Takvim report they could even let him leave on a free because of his high wages.

Babel’s contract with Galatasaray will expire at the end of June 2022.