It was quite an exciting transfer deadline day for Fulham. First, there were claims the club were trying to sign Sergi Enrich from Eibar.

It seemed a lofty ambition for Fulham. Enrich has been excellent for Eibar this season, putting off the pitch controversies to bed (no pun intended), but it turned out to be actually true.

However, Eibar weren’t prepared to play, and Sport Witness were informed that a deal became dead on Tuesday afternoon. It was just too complicated for deadline day.

Enrich has since come to an outline agreement over a contract extension and pay rise with Eibar, which will also see his buyout clause raised from the current level of €10m. 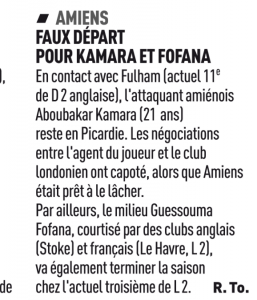 Fulham managed to agree a deal with Amiens, but as L’Equipe report on Thursday, negotiations between the London club and Kamara’s agent broke down.

After Kamara, Fulham went on to Gohi Cyriac and signed the Oostende striker on loan until the end of the season.