Fulham have made an official bid for Benfica youngster Florentino Luis, but the Portuguese club’s demands could hold up any deal.

Record report that the Cottagers, who are looking to bolster their squad this summer after securing promotion to the Premier League, are keen on the 21-year-old.

They have made a ‘formal offer’ for him, proposing a loan with a ‘compulsory purchase’ option included at the end of it because they ‘believe in his potential’.

That has been signified by Fulham coach Scott Parker travelling to Lisbon to ‘help with the charm operation’ having made it clear the midfielder is one of their priorities for next season. 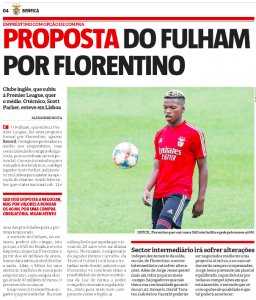 Their will to get a deal done might not be enough, though, because Benfica are only willing to negotiate a deal at €40m as their intention is to make the player difficult to sign.

They’ve already seen a bid from AC Milan, who offered €3m for a loan with a compulsory purchase clause of €30m, but those negotiations have not progressed.

New Benfica boss Jorge Jesus has already told the 20-year-old he plans to use him next season but the player wants to move and his agent, Bruno Carvalho, is working on an exit.

Indeed, the player is ‘looking forward’ to moving and would welcome a switch to the Premier League, although it’s not clear if he feels the same about the prospect of playing for Fulham.